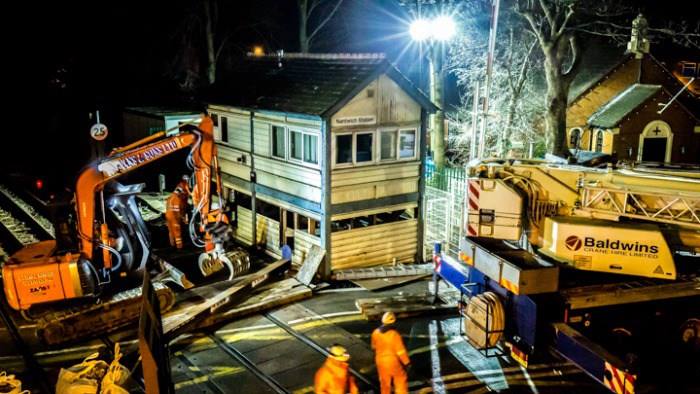 [cmsmasters_row][cmsmasters_column data_width=”1/1″][cmsmasters_text]
An interesting historical post that has been shared about our signal box!
“There is a fascinating post by Sybil Ruscoe over on the Wem Shropshire, History & Nostalgia page, about Aston Park, once a US-run military stores centre, but now the Industrial Estate and Lower Lacon Caravan Park. During the war, Aston Park had a considerable rail network for the delivery of materiel for the war effort, with sidings alongside the main line and tracks running down between the lines of buildings where the access roads now run.
“The Camp” was busy enough that it had its own signal box to control access to the internal rail system, which was wood-built and extraordinarily large for the job it was required to do – perhaps it was the first signal box that the LMS Railway had to hand that could be put up at short notice.
Following the war, the signal box became superfluous when the rail link was severed, and at some point thereafter (the date seems unclear) it was moved to a position adjacent to Nantwich station to control the Wellington Road level crossing. It obviously became superfluous at the same time as the Wem town signal box but, unlike our town box, it survived demolition, and is now part of OSL Global’s railway training site at Crewe.”
[/cmsmasters_text][/cmsmasters_column][/cmsmasters_row]